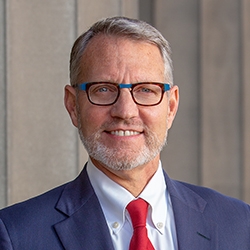 Robert Keller is a shareholder with the firm. He works closely with a wide range of municipal government clients throughout Utah in land use litigation, including vested rights, zoning issues and condemnation. An experienced litigator, he has 30 reported appellate decisions.

Rob’s land use practice often includes defending municipalities against claims filed by developers who disagree with local regulations or their application, or against claims by neighbors or others who oppose municipal decisions.

A significant part of Rob’s land use practice also involves assisting local governments with the use of eminent domain to acquire private property that is needed for public building projects. He served on the committee establishing the Model Utah Jury Instructions to be used in condemnation actions.

In addition, Rob’s practice increasingly includes the defense of municipalities against challenges to their sign ordinances – especially in the wake of the 2015 U.S. Supreme Court’s decision in Reed v. City of Gilbert. Under this recent decision, which clarified when municipalities may impose content-based restrictions on signage, most existing ordinances are problematic – and some no longer enforceable.

Rob’s philosophy of practice is to use listening and logical reasoning skills and experience to de-escalate contentious interactions and reach the best possible outcome for all parties – through negotiation or, if necessary, litigation.

In 2013, the owner of a Big Daddy’s Pizza restaurant placed an A-frame advertising sign in front of his establishment – but not on his property. When West Valley City asked him to remove it, the owner challenged the City’s sign ordinance as a violation of his first amendment rights to free speech. In this 2015 case before the U.S. District Court, Rob Keller represented the City. The case took on additional complexity after the U.S. Supreme Court issued its landmark decision in Reed v. City of Gilbert.  In spite of this, the City prevailed on summary judgment. The decision was not appealed.

Doctor John’s operates stores that sell “adult” products. After this company located a store in Roy City, the City passed an ordinance that subjected “sexually oriented businesses” to certain regulations. Doctor John’s challenged this ordinance in Utah’s Federal District Court as posing an unconstitutional restriction on speech. Rob Keller provided the City with a solid defense. On motion after discovery, the Court granted the City’s motion for summary judgment – finding that the ordinance was constitutional in all respects. In addition, Rob successfully defended the District Court’s decisions on two appeals to the 10th Circuit Court of Appeals.

Utah Supreme Court clarifies applicable statute of limitation in local land-use decisions
South Jordan City granted an application for development approval for an office building and associated parking. Various environmental groups opposed the decision. They sued the City, claiming that this approval violated its own ordinances. The challengers argued that their claim was an enforcement action, and therefore not subject to the 30-day limitations provision which would otherwise apply to any challenge to a City’s land-use decision. Representing the City, Rob Keller obtained summary judgment in the City’s favor, which the challengers appealed. In upholding the decision, the Utah Supreme Court clarified that even though the challengers characterized their action as an enforcement action (to which no express limitations provision applied) they were nevertheless required to comply with the 30-day limitations provision otherwise applicable to a City’s land-use decision.

Outside the office, I enjoy spending time with my wife and family (as much as that is possible now that our two sons are in college). I ride my road bike several times each week in an attempt to recreate the fitness that allowed me to regularly race a decade ago. I love to cross-country ski and hike with the family dog during the winter. I also appreciate good fiction when I can find it.