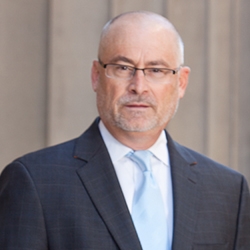 Richard Van Wagoner is the Chair of the firm’s Board of Directors.  He also leads the firm’s Criminal Defense Practice Group. His practice focuses on criminal defense—primarily white-collar and some street crime—commercial litigation, and First Amendment law.

Much of Rick’s practice involves representing clients who are either under criminal investigation or who have been charged with crimes. He regularly defends individuals charged in both state and federal court for many offenses including theft and fraud charges, rape and sexual assault, tax and securities fraud, drug offenses, and other serious and complex felonies.  He has been involved in numerous significant cases of alleged white-collar crime and approaches his cases with a deep commitment and attempt to understand both the mistaken mindset prosecutors and investigators attribute to his clients and the criminal mind.

A substantial part of Rick’s criminal defense practice focuses on working with prosecutorial and investigative agencies to prevent charges from being filed in the first place.  When charges are filed, he provides his client with a vigorous defense.

Rick’s civil practice often involves cases with potential criminal cross-over—a mix that can complicate both strategies.  Often, these cases also involve professional licensing issues.  He is often asked to speak before his peers in the legal industry on the complex interplay between criminal and civil matters.

The third leg of Rick’s practice is First Amendment law.  He has represented institutional clients in cases involving First Amendment Speech, Religion, and Association Clauses.  He has also represented individuals whose speech rights and rights of association have been impaired or infringed due to their unpopularity which is the essence of the constitutional protections.  Rick is a member and former board member of the American Civil Liberties Union of Utah.

Rick is deeply interested in the issues surrounding meaningful reform of the criminal justice system.

Defending Utah’s former Attorney General.  Represents former Utah Attorney General arrested and charged with ten felonies—including receiving or soliciting bribes, accepting gifts, tampering with witnesses and evidence, and participating in a pattern of unlawful conduct.  Rick is a member of the SCM team defending the Attorney General against these allegations.  In this highly publicized ongoing case, the firm has succeeded so far in separating their client’s case from that of his successor.  In addition, the firm successfully fought subpoenas demanding the client testify in a related communications fraud trial.

Supreme Court reverses convictions of real estate developers.  Following a criminal jury trial, Rick’s clients were convicted of three counts of failure to file a proper tax return and one count of engaging in a pattern of unlawful activity (but acquitted of all counts of tax evasion).   An appeal to the Utah Supreme Court resulted in the Court reversing the counts and a remand to the trial court with instructions to enter a judgment of acquittal.

Federal judge says mayor did not defame.   Represented former mayor of West Valley City, Utah, who wrote articles under a pseudonym. In one particular published article, the mayor stated that a contract employee of a fiber optics network had been accused of extortion in court documents in an employee dispute.  This contract employee filed a defamation lawsuit against the mayor, West Valley City, and Deseret Digital Media.  The suit was dismissed by a federal judge, and the employee appealed.  The Tenth Circuit Court of Appeals affirmed.

Federal Acquittals in Fur Breeder’s Cooperative Bombing.   Rick represented one of three defendants who went to trail in the fire-bombing of the Fur Breeder’s Cooperative, which also included the pipe-bombing of four vehicles.  The jury delivered not guilty verdicts on all 26 counts against the three defendants, two of whom were facing life in federal prison without the possibility of release.

At any given time, Rick represents clients who are being investigated for, or have been charged with, claims of fraud that might relate to tax, bank, mortgage, real estate, health care, communications, securities, and others.  Rick also defends clients in “street crime” related cases.  These include clients in homicides, cases involving allegations of sexual impropriety—including possession of child pornography—and cases involving drug possession and substance abuse.

Outside of the office, Rick is an avid bicyclist, enjoys cooking, reading and spending time with his family. He is also an accomplished writer and publishes a weekly article on Medium.