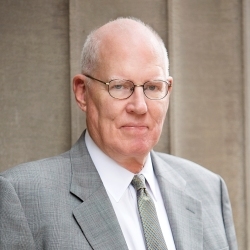 Mike Lowe is an accomplished trial attorney. He has practiced for more than 45 years, appearing primarily for the defense, and has dealt with a wide range of legal issues in numerous industries, businesses and market sectors.

He has handled lengthy mediations, arbitrations and trials to verdict of complex litigation matters in multiple areas of legal discipline, with a practice emphasis on construction industry claims. These include representing general and sub-contractors surety bond loss and work-out difficulties and complex primary, excess, umbrella and reinsurance coverage matters with an emphasis on environmental pollution, asbestos, sub-prime lease fraud and other forms of commercial litigation.

During his career, he has also handled to completion, serious injury cases, professional liability defense, including medical, legal, accounting, engineering and premises liability. He has tried in excess of 90 cases to verdict in state and federal trial courts, and has appeared in state and federal trial courts nationwide. He has argued matters in most California Appellate Districts and before the Ninth Circuit Court of Appeals. He is also admitted to practice before the United States Supreme Court. He was selected by the Los Angeles Daily Journal to be profiled in an article series devoted to prominent insurance defense counsel in Southern California. He has been an invited guest speaker and panel member on subjects related to insurance and commercial litigation and trial tactics, trial of the complex commercial case (both claim and defense), the handling of experts in trial and discovery, and other aspects of defending the insurance industry and defending and pursuing affirmative commercial business claims.

In May 2002, Mike served as one of three lead trial counsel on one of the ten largest cases ever tried to verdict in California. The case involved a six month trial in three separate phases: insurance coverage, including umbrella excess policies, allowable evidence, and jury presentation on fact issues. He has also tried cases to verdict in Federal “MDL” (Multidistrict Litigation) lawsuits in California, Nevada, and Ohio Federal District Courts.

Prior to joining SCM in 2015, Mike was a trial partner for 35 years in the Southern California litigation firm of Booth, Mitchel & Strange.

Mike holds academic book awards in academic classes and for performance in academic moot court argument. He has served as a judge in law school trial and appellate competitions numerous times, and devotes volunteer time as a Chief Judge in middle school and high school educational trial competitions.