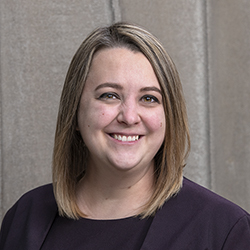 LaShel Shaw is an accomplished litigation attorney with expertise in both intellectual property and government defense. Whether she’s representing an artist whose work is being used without compensation, a company defending its trademarks, or a municipality accused of wrongful use of deadly force, LaShel brings insight, empathy, and ingenuity to bear. Those who have worked with LaShel describe her as driven, a gifted writer, and able to quickly hone in on the issues that truly matter.

With respect to intellectual property, LaShel understands the unique legal challenges facing designers, creators, and authors, as well as the companies that hire them. She has experience with matters involving patent validity and ownership, copyright infringement, joint or contested authorship, trademarks, trade secrets, and false advertising. LaShel has successfully handled messy unfair competition claims, contested trademark registrations, and tough allegations of fair use.

As a government defense attorney, LaShel is well-versed in the Utah Governmental Immunity Act and qualified immunity. She has defended government entities, law enforcement officers, and jail nurses in cases alleging deliberate indifference and unlawful force, and is experienced in First Amendment retaliation and malicious prosecution claims. She also has successfully defended over a dozen property tax appeals (for both centrally-assessed and locally-assessed properties) and property tax exemption requests.

Prior to joining SCM, LaShel worked in the Salt Lake County District Attorney’s Office as a civil litigator, where she represented the county in a wide variety of legal disputes. She was also previously a shareholder at Parr Brown Gee & Loveless, focusing on commercial litigation, intellectual property, and entertainment law, and worked as a law clerk for the Honorable Clark Waddoups of the Federal District of Utah.

Outside of the office, LaShel enjoys reading cookbooks, playing RPGs, and taking long walks through the city with her dog. She had an unusually academic childhood—graduating from college with her bachelor’s degree at age sixteen—and worked as a newspaper reporter for the Mt. Pleasant Pyramid before attending graduate school, where she defended a master’s thesis on medieval Viking religion.

LaShel has also tried several cases before the Trademark Trial and Appeal Board as well as the Utah State Tax Commission.