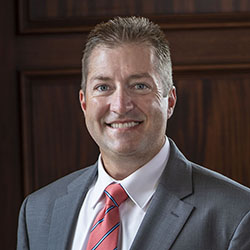 Joel Taylor’s practice focuses on complex commercial disputes, transportation and trucking cases, catastrophic injury cases, extra-contractual bad-faith litigation, and all aspects of insurance law and litigation. He is committed to providing his clients exceptional legal counsel with favorable results. He also guides clients through state insurance department interfacing and compliance. As part of his practice, Joel handles rapid-response requests to provide guidance and counsel to clients when trucking and other transportation-related accidents occur. Joel has unique expertise in handling underinsured motorist claims and uninsured motorist claims.

As a trial lawyer, he has substantial first-chair trial experience in front of juries, judges, and arbitrations. He represents clients in both state and federal courts. In addition, Joel has an active appellate practice and has argued cases before both the Utah Court of Appeals and the Utah Supreme Court. He has been at the forefront on issues of first impression in Utah and developing Utah’s insurance-related caselaw.

As a testament to his dedication to client service and successful results, Joel has been named as a rising star and a Top-Rated Personal Injury Attorney by Mountain States Super Lawyers for the past five years. In addition, Utah Business Magazine lists Joel as among “Utah’s Legal Elite.”

Outside of the office, Joel is an avid outdoorsman and sports enthusiast. He enjoys spending time with his family, fishing, and hunting in Utah’s Wasatch Mountains.