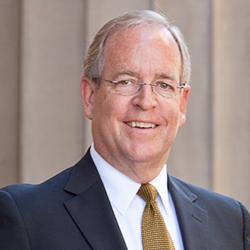 David has a national practice focusing on contract formation as well as business and construction litigation and dispute resolution. He has represented owners, contractors and sureties in construction disputes and related matters for more than thirty-five years.

David also consults with business entities, including technology clients, through issues of business formation, mergers and acquisitions, and in structuring and negotiating domestic and international strategic alliances. He has represented several clients in the technology sector in contracting and licensing matters and in structuring relationships with resellers, OEMs, and other distribution channels.

He has lectured before local and national professional organizations and has authored several papers dealing with construction, surety law, alternative dispute resolution and other topics. He is a panel arbitrator for the American Arbitration Association on construction and complex commercial disputes and is a respected mediator in such disputes. He is among the co-founders of the Western States Surety Conference, which has furnished annual instruction to surety professionals since 1993.

David took a leave of absence from the firm from February 2016 to August 2017 to serve a mission for the Church of Jesus Christ of Latter-day Saints in France and Belgium with his wife Connie.

Within the firm, David served as President of SCM from 2007–2011 and as Board Chair from 2011 to 2016.  He served for many years on the Sandy City (Utah) Public Utilities Advisory Board, which he chaired for more than a decade.