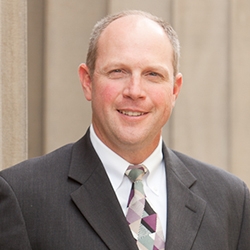 Brian Miller is a shareholder who leads the firm’s Health Care & Medical Malpractice Defense Group.  For more than 20 years, Brian has defended health care providers against the full range of medical malpractice claims – including many childbirth injury claims, which are considered the most difficult and potentially the most expensive of such claims.  Brian makes a close study of emerging defenses to high-damage claims involving catastrophic injuries and life care plans.

Brian helped establish and defend laws that protect the interests of Utah health care providers in, including the landmark Utah Supreme Court decision upholding the statutory cap on general damages awardable against health care providers.  Much of his work is referred to him by other lawyers and current and former clients.  Brian is interested in medical malpractice prevention as well as defense.  He often conducts in-service programs for his clients, as well as grand rounds programs for Utah hospital physicians.

Brian devotes a good portion of his practice to defense of a major healthcare group which owns and operates five hospitals in Utah. He assists this client with a range of Utah medical malpractice defense matters and issues relating to quality improvement and risk management.

As a variation in his practice, Brian represents Utah’s largest amusement park.

Brian was mentored by some of the most highly regarded and respected litigation and trial attorneys in Utah. In turn, he seeks to pass on what he knows to younger partners and associates.  He frequently participates as a judge in mock trials and advocacy events for local law schools.  He is involved as a Master of the Bench in the American Inns of Court program and regularly lectures to pre-law and law students on legal careers.

Within the Firm, Brian Chairs the Nomination and Business Organization Committee.  He is also a member of the firm’s Board of Directors.

Outside of the office, Brian spends time with his family in the mountains of Utah – hiking, camping and fishing.  They also enjoy taking multi-day hikes on back-country trails in many of the National Parks including Yellowstone, Arches, Zion, Bryce Canyon, Capitol Reef and Canyonlands.